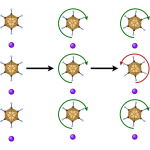 Many functional materials have the perovskite topology. The functionality, however, invariably comes from some distortion away from the ideal cubic perovskite structure. For instance, electrical polarisation arises from distortions that remove the centre of symmetry. The hybrid perovskite analogues, which consist of metal coordination octahedra connected by polyatomic linkers, are widely recognised to be more mechanically flexible than the inorganic perovskites, in which these octahedra actually share vertex atoms. With a view to understanding the actual and potential functionality of the hybrid perovskites, there has thus been substantial interest in the distortion modes that characterise their observed phase transitions.

In a paper recently published in Angewandte Chemie, we investigate a series of cyanide double perovskite (Prussian blue) analogues using X-ray diffraction from single crystals and neutron diffraction (using the HRPD instrument at ISIS) from powder samples.1 We show that the particular series of structures these materials adopt is rare in the inorganic perovskites, and that it is only known to occur in lead-containing materials, intriguingly suggesting that the stereochemically active Pb2+ lone pair can be effectively mimicked by a less toxic polyatomic organic cation. We also observe that the thermal expansion of these materials is almost one-dimensional (that is, they exhibit zero area thermal expansion); we demonstrate that this arises since the framework approaches the perfect cubic structure in a way that almost exactly cancels out the thermal expansion of its components.